“Comparison is the thief of joy” (Teddy Roosevelt)
So often it really is.

But it is hard not to compare when we are in a competition, especially when there are prizes on the line. Right?

So we have to find the balance between being competitive/wanting to win and comparing ourselves to others along the way.
And the balance will need to be unique to us…

I’ve been repeating myself a lot lately about the importance of acknowledging what is going well along the way and doing more “self-congratulating”.
In fact recently, 3 of my key teammates began a practice of recording all of their daily accomplishments and reporting in about the things of which they are most proud. These few minutes spent at the end of each day is a nice way to close out the work day because it shows us how much we are really doing and how far we have progressed…
I recommend it to anyone- it helps.

That being said, I know many of you (me included) are still prone to feeling the sting of disappointment when we’ve busted our behinds toward a goal and we don’t “win the prize”. (Although if you ask me, it isn’t really about the prizes it is about how great you feel when you conclude with any amount of progress…)

To help send home this message, I have two quick stories for you that demonstrate the ups and downs of the win/ loss cycles.

I’ll never forget one piano competition I was in as a teenage girl.
I practiced, I prepped. I even did visualization. I had several pieces prepared. It was the music festival and if I remember correctly both my teacher and I went in thinking I was going to win a lot of 1st place ribbons.
I had such a passion for the piano and I tried to channel the emotion of the pieces.
On that day, it was a Brahms piece in a minor key. I was kind of a moody teenager and I loved anything with in a minor key with plenty of darkness and angst. This piece involved a substantial amount of crashing around and drama so it was one of my favorites to perform…

I remember playing the start of the piece with such feeling and flare and then part way through stuffing up something in the mid-section. I left the stage just devastated. I was in tears as I sat in the audience and listened to the other competitors perform. I was so disappointed with myself and my “failure”.

My teacher had to leave to go hear another student compete so I waited with my mother- who was really patient- for the adjudication and the feedback that always came at the end of performances and before certificates/ trophies were awarded.

To my absolute shock I won 1st. I think even my mother, who was a super fan of mine was surprised.
Despite totally feeling like I had ruined the piece and making a substantial error, I won. I left the stage again in tears but this time because I didn’t feel I deserved it and I was still disappointed with my performance.

Most recently I had entered to win an award for the most improved business (in the MPower Fitness Boot Camp Family).
I prepared my presentation, I diligently collected all of my numbers. I eloquently executed a powerpoint summary of how the team had grown, our continuing education efforts, our client successes, my mistakes, lessons and learnings as a leader, our business financials etc. And by far my numbers were better.I NAILED that presentation. But I didn’t win.

I was so sad. I had given all of my effort in the previous business quarter to the team and to our growth and I kicked butt on that presentation. I felt so embarrassed telling the team that we hadn’t won and I was frustrated because on the surface my numbers were better… I was told after that that level of growth was expected for me and that the others’ improvements were given more weight because they had further to go…

Funny how one win feels awful and one loss feels worse.

Sometimes we win 1st when we least expect it, sometimes we never win first even though we are doing everything we can to be the best we can be and sometimes we get overlooked when we feel like we’ve nailed it completely.

The reason that I’m sharing this is that I’ve realized that if you will recognize yourself for the work you are doing as you progress and at the end of your milestones you’ll feel even better about the journey and you’ll be less tied to the outcome.

As human beings we need recognition. We especially need it from people we respect or who are authorities in our lives. But we get into big trouble when we tie our self-esteem too heavily to external recognition. Meaning when we seek only external validation of our progress, success or worthiness over that which we provide ourselves internally we will be disappointed more often than not.

We’ve all been there.

Which is why this most recent loss sucked but I was fortunately able to move through it faster than ever because along the way I had been noting all that I had done and all that had gone well…so when the comparison demon tried to rear his ugly head and negate all the amazing work we had done I told that jerk to get stuffed because even though I didn’t win I had still kicked a**.


Committed to your success,
Megan K and the team

Hi there!
A few weekends ago, my dear friend and former Canadian National Snowboarder- Charmaine Ironside- was presenting and sharing her story at a fitness conference.

She talked a lot about her struggles with her inner voice.
Not unlike me, and sadly (I think) many of you, her inner voice was overly critical, disrespectful and at times just plain mean.

Maybe you can relate?

She said that one of the things that changed her life was an committed effort to stop saying nasty and unhelpful things to herself.

Recently I began this for myself. While it is a work in progress, like any new habit, it helping. I had no idea what an a**hole my inner voice sometimes was- especially to me.
Recently another speaker also said that all of us will have times when we are genuinely displeased with our behavior and when we simply do not handle the situation we are in with as much tact, grace or composure as we might have liked. I thought good gracious, did he see me yesterday? Was this talk for me? But he went on to say, if we are “always handling everything with excellent composure then perhaps we aren’t really challenging ourselves because nobody who is truly pushing himself will always behave impeccably”. Take home message- you’re going to stuff things up. You’re going to be a jerk sometimes. Apologize. Make amends. Own it but STOP beating yourself up.

If you are willing, spend this next few days noticing anytime you say anything mean or self defeating to yourself.

If/ When you catch yourself say “cancel” internally and immediately replace it with kinder words. If you have a daughter or son, replace it with what you would say to her or him or someone else you love.

I promise you, catching yourself and replacing those unhelpful words will make a massive difference in your happiness, your courage and willingness to try new things and your overall success.

Committed to your success,

PS. As always, please come check us out for 3 free sessions! Visit one of our websites:

You should be PROUD of how far you have come.

So without further delay, our winners are…
(As a reminder the results are scaled so that those with less to lose to reach American College of Sports Medicine Healthy Standards receive more points…which is why despite being quite close in number Brendan beat out Dustin). 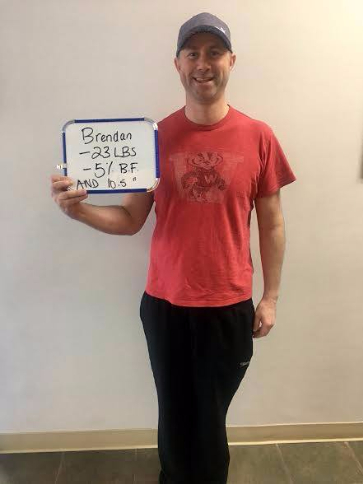 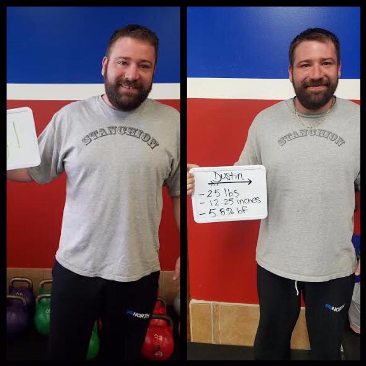 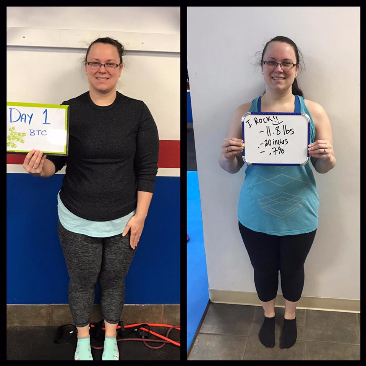 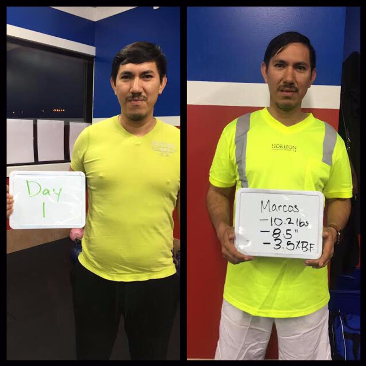 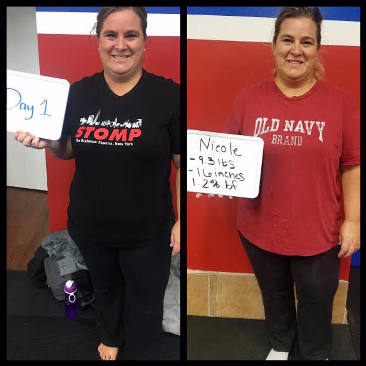 Also a big shout out to our close competitors!

Some amazing results made by

Amazing work everyone!
We are so proud of each of you!

Check us out for 3 free sessions at one of our locations:

Today I ask you to please revisit the goals you’ve set for 2017.
We are now into the second Quarter of the year.
Awesome right?! 🙂

Are you on track?
We hope so. If you are not, we are here to help.

As you revisit your goals, please remember
Your goals need to align with the big picture vision you have for your life.

I have spoken with a few clients these last few days about their goals because they were struggling to stick with a short-term aggressive results driven meal plan that was selected to get faster results. (NOT for its sustainability)

I asked, why do you want to do this? Do you feel better doing this? Yes, we know this plan works.
But if you hate it, is it worth it? (Only you can answer this because Sometimes we are willing to tolerate/ sacrifice a high degree of discipline in the short term because the result we want is worth it…)
BUT sometimes it isn’t. YOU Get to decide.

Ideally the changes we are looking to make need to mostly be things we enjoy and are willing to sustain.

My dear friend Dustin hates Boot Camp.
He comes though because he feels SO MUCH better after he works out.
He is changing his eating because he has more energy and his mood is better.
He appreciates exercise and food changes because he is sleeping better and he looks better.
He is willing to do these things because he likes the results even though he doesn’t necessarily love the doing of the thing: boot camp, cutting back on alcohol and eating differently.

Ideally we are changing behavior because it supports the long term vision we have for our lives…not just because it will get us a short term result.

I mostly don’t eat any gluten or dairy because I FEEL better.
I exercise consistently because I’m less of a moody “b” when I take care of myself.
I limit alcohol because it is a trigger for anxiety for me…
You get the idea.

As fitness professionals we want you to live your longest, healthiest, happiest life. This means getting your body composition into the healthy recommended ranges (per the American College of Sports Medicine) and moving around and fueling yourself properly because it feels great and leads to higher quality of life.

It is Q2, lets all recommit to ourselves and our goals.
Your goals are for YOU.
We believe in you.